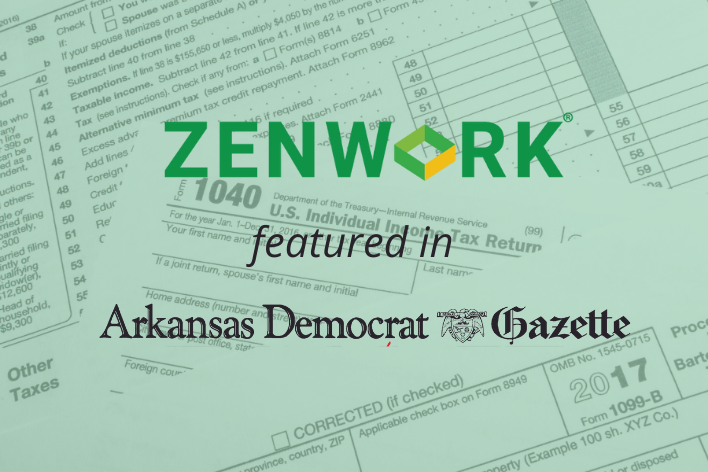 Fayetteville-based Zenwork, a tax and regulatory reporting software company, announced Tuesday it has closed on a $163 million minority equity transaction with Spectrum Equity.

Zenwork's products are geared toward tax compliance, including solutions dealing with independent contractors, vendors and suppliers, according to the company. The investment will be used in part to expand and innovate Zenwork's Tax1099 and Compliancely brands.

Sanjeev Singh, founder, and chief executive officer of Zenwork said in a phone interview his company has been profitable from the start and prides itself on being a bootstrap operation -- functioning without the need for outside capital. He said potential investors have pursued Zenwork for years, some wanting to buy the company outright, others not offering the right kind of deal, but none were the right fit.

Spectrum Equity, he said, represented the type of deal Zenwork was looking for -- smart investors to work with who could help the company take its next big growth step over the next five years or so.

The company expects to double its employee count in Northwest Arkansas to 50 over the next 12 months. In total, the expansion means 80 more jobs companywide, bringing Zenwork total to about 160.

Zenwork has more than 100,000 small business customers around the United States including Berkshire Hathaway Mars, and Rover, along with 30,000 Certified Public Accounting firms, according to a news release. The company has added 40,000 new clients in each of the last two years.

Adam Margolin, managing director with Spectrum Equity said in a phone interview said his company is thrilled to invest in Zenwork, a company which is seeing solid expansion in the small to medium sized business category -- operations with less than 500 employees.

"Zenwork is growing, profitable and a leader in its space,' Margolin said.

He declined to say how large a stake Spectrum Equity obtained for its investment but confirmed it was a minority share.

Zenwork is privately owned, has been in operation for more than 10 years.

It currently employs about 80 people across its operations in the U.S. and India and offers multiple compliance platforms including its flagship product Tax1099 and Compliancely. It has offices on the Fayetteville Downtown square.

For more than 25 years, Spectrum Equity has provided capital and strategic support to companies in the information economy. It's currently investing its ninth fund with $1.5 billion in capital, according to the company.

Spectrum Equity has invested in companies like Ancestry, GoodRx, Grubhub and SurveyMonkey. It is based in Boston and San Francisco.

As part of the deal, Margolin and Cameron Ghorbani, vice president of Spectrum Equity, will become part of Zenwork's board of directors.