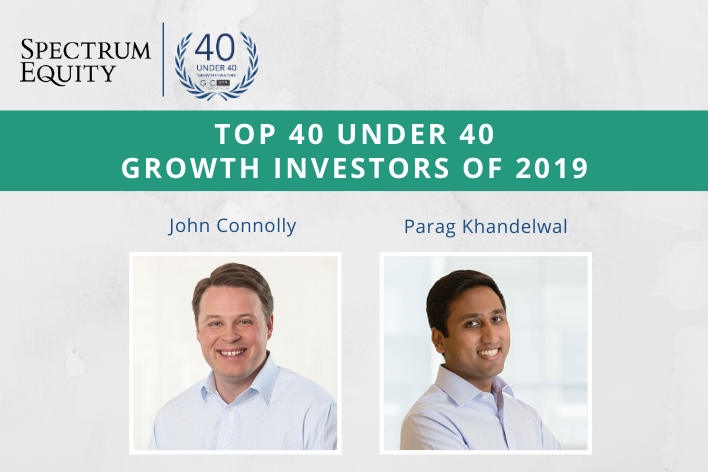 Spectrum Equity is delighted to announce John Connolly and Parag Khandelwal have been recognized by GrowthCap for their contributions as growth equity investors and tremendous work with portfolio companies. This represents the third consecutive year that John Connolly has been named to the GrowthCap Top 40 Under 40 list.

John joined Spectrum Equity in 2009 as an Associate. Now a Principal, John has been involved in 11 transactions, representing approximately $550 million of invested capital. John has completed a wide range of growth investments ranging from minority investments to full buyouts. He has been most active in the education technology, consumer internet, online marketplace, and SMB software sectors. He has participated in Spectrum’s investments in Ancestry, DataCamp, ExamSoft, Finalsite, GoodRx, Grubhub, Headspace, Jimdo, Kajabi, Prezi, and Teachers Pay Teachers. He currently serves as a board member or board observer at Teachers Pay Teachers, Jimdo, Kajabi, DataCamp and ExamSoft. Notably, John was involved in Spectrum’s investments and subsequent liquidity events at Grubhub (IPO in 2014), Finalsite (sale in 2016), Ancestry (recapitalization in 2016), and GoodRx (recapitalization in 2018).

“Spectrum Equity’s singular focus on growth-stage, internet, software and information services companies with recurring revenue business models provides us with deeply relevant expertise and contributes to our growing network of resources. We are purpose built to help these companies accelerate growth and create lasting businesses that define the categories in which they operate. I am fortunate to be part of the Spectrum team and to have partnered with exceptional founders and management teams over the past decade.” – John Connolly

Parag joined Spectrum Equity in 2012 as an Associate. Now a Principal, Parag has been involved in 8 transactions, representing approximately $580 million of invested capital. Parag has been most active in enterprise software, financial technology, education & certification, and sales enablement sectors. He has participated in Spectrum’s investments in BATS Global Markets (acquired by CBOE in 2017), Bitly, Digital Marketing Institute, Offensive Security, Origami Risk, RainKing (acquired by DiscoverOrg in 2017), and Verafin (2014, 2019). He currently serves on the board of Bitly, Digital Marketing Institute, Offensive Security, and Origami Risk.

“Spectrum Equity’s uniquely narrow focus by business model and company stage has enabled us to partner with amazing entrepreneurs and help them achieve their growth ambitions. We’ve developed pattern recognition over the past 25 years from backing leading information led-businesses, which helps us add real value, both on strategic initiatives and challenges as these companies scale. These efforts drive distinctive results for our portfolio companies and have helped contribute to the Spectrum franchise. Between these entrepreneurs and my Spectrum colleagues, I’m incredibly fortunate to work with such exceptional people.” – Parag Khandelwal