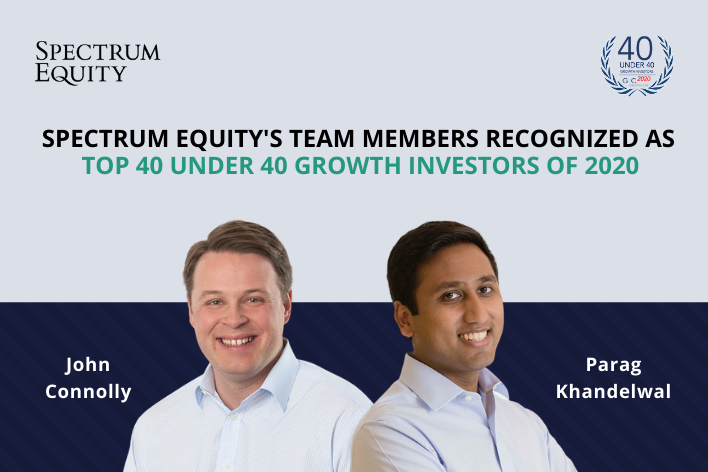 Spectrum Equity is delighted to announce John Connolly and Parag Khandelwal have been recognized by GrowthCap for their contributions as growth equity investors and tremendous work with portfolio companies. This represents the fourth and second consecutive year for John and Parag, respectively, to be named to the GrowthCap Top 40 Under 40 list.

GrowthCap announced today The Top 40 Under 40 Growth Investors of 2020. This year marks the seventh anniversary since it first began publishing the awards list. Notably, over the years GrowthCap’s process of evaluating nominees has evolved as the growth equity field has become more competitive and nuanced.

In addition to the formal nomination process where information on breadth of experience and performance metrics are reviewed, GrowthCap took into consideration third party feedback from CEOs and other executives. “We find it most impressive when investors can achieve top tier returns while earning the respect, and in some cases, admiration from the CEOs they back,” states GrowthCap Managing Partner, RJ Lumba.

RJ further adds, “Having worked closely with the growth equity and private equity industry for over twenty years, I have come to appreciate the incredible talent and skill required to be a successful growth investor. It not only requires business intellect and judgement, it also requires consistent work ethic, high emotional intelligence and a determination to push through the most challenging situations.”

John joined Spectrum Equity in 2009 as an Associate. Now a Managing Director, John has been involved in 11 transactions, representing approximately $550 million of invested capital. John has completed a wide range of growth investments ranging from minority investments to full buyouts. He has been most active in the education technology, consumer internet, online marketplace, and SMB software sectors. John worked on Spectrum’s investments in Ancestry (acquired by financial sponsor), ExamSoft (acquired by Turnitin), Finalsite (acquired by financial sponsor), GoodRx (IPO) and Grubhub (IPO). He currently works with Teachers Pay Teachers, Jimdo, Kajabi, Headspace, Prezi and DataCamp.

“Playing a role in helping teams and companies realize their full potential is an incredible privilege and responsibility. We embrace our role as partners and empower management teams to lean-in and invest in their growth initiatives. Our stage, business model and sector focus afford us clarity of purpose and unique capabilities to help our companies define the categories in which they operate. Ultimately, there is nothing more rewarding than playing some small part in helping our teams and companies achieve their goals.” – John Connolly

Parag joined Spectrum Equity in 2012 as an Associate. Now a Principal, Parag has been involved in 9 transactions, representing approximately $675 million of invested capital. Parag has been most active in enterprise software, financial technology, education & certification and sales enablement sectors. He has been involved in Spectrum’s investments in BATS Global Markets (acquired by CBOE), RainKing (acquired by DiscoverOrg/ZoomInfo) and Verafin (pending acquisition by Nasdaq). He currently serves on the board of Bitly, Digital Marketing Institute, Offensive Security, Origami Risk and OurFamilyWizard.

“Spectrum Equity’s focus on internet-enabled software and information services companies has enabled us to invest in an incredibly dynamic category over the last decade. I’m grateful to have built deep relationships and work hand-in-hand with successful entrepreneurs that are innovating and reshaping many sectors of our economy. Every company I’ve had the opportunity to work with in the Spectrum Equity family has exhibited a distinctive business practice that defies traditional norms and allows them to innovate and disrupt their incumbent markets. I’m fortunate to apply those learnings to be a better partner to founders and management teams.” – Parag Khandelwal