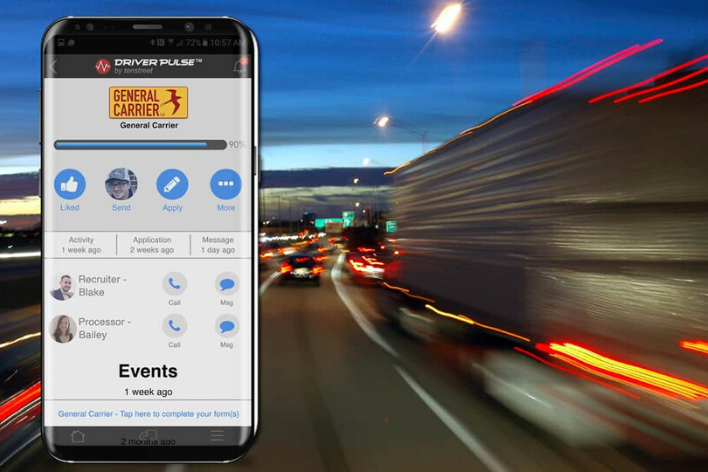 The waiting game to find out if a recruiter is interested in hiring a driver or even if their application has reached the right person can be excruciating for those who are anxious to jump behind the wheel of a tractor-trailer and get those wheels turning to start making money.

Many old-school truckers remember with frustration the days of faxing or mailing in their employment applications, then waiting weeks to hear back from recruiters about possible job opportunities. That was often followed by time spent with telephone calls and faxes back and forth between drivers and carriers with follow-up questions about missing paperwork, responding to questions about background checks or correcting gaps in their employment histories.

However, those days are long gone as one company, Tenstreet, a Tulsa, Oklahoma-based software-as-a-service company specializing in the trucking industry, has created a mobile app called Driver Pulse that matches a driver’s skills to thousands of carriers looking for qualified drivers.

Driver Pulse takes the guesswork out of wondering if a driver’s application is being considered through its transparent mobile tool that features a customizable checklist for both applicants and recruiters.

Heather Hobbs-Thompson, safety director at JMS Transportation in Cedar Rapids, Iowa, said her small regional company hires between five and 10 drivers per month. Using the checklist feature in Driver Pulse, she said she can potentially hire a driver within five days if there aren’t any major hiccups.

According to a survey conducted by Indeed, a traditional online employment-related search engine, 44% of job applicants stated it took weeks before even hearing back from a potential employer about an open position. Only 4% of those surveyed said they heard back within one day of submitting their applications.

Once a driver downloads the app, which is free, and fills out the application, Driver Pulse can match his/her skills with thousands of carriers looking for qualified drivers. Drivers can then start messaging recruiters in real-time about positions they are interested in pursuing.

Hobbs-Thompson said the transparent checklist feature in Driver Pulse allows a potential driver to see what paperwork she is requesting and what information is still needed to move forward with the hiring process. She can also see that information is uploaded.

“When I run a background check, it (Driver Pulse) automatically lets the driver know that I’ve started the process, so it really cuts down on the calls from drivers asking me if their applications have been received,” Hobbs-Thompson told FreightWaves.

Hobbs-Thompson was an early adopter of the technology because in today’s tight labor market, every minute counts as trucking companies look for every competitive edge over others vying for the same pool of qualified drivers.

Thousands of drivers are retiring each year and the trucking industry is having a hard time attracting younger drivers, who may have to spend some nights or a week or two away from their families.

This means competition is fierce among carriers.

Using the checklist in Driver Pulse, a driver who applies for a job with JMS on Monday could potentially be hired by Friday, she said. The same hiring process used to take her two to three weeks from start to finish prior to Tenstreet’s focus on streamlining the recruiting and hiring process.

“It really streamlines the process so drivers know what to expect and what they still need from us to move forward,” Hobbs-Thompson. “If there is a discrepancy, I can automatically send a message to the driver, who can then go online and fix it right away.”

According to Tenstreet’s driver data, those who sign up using the company’s Driver Pulse app talk to around seven trucking companies by the time they sign on with a carrier.

Some companies, including JMS, hire both company drivers and owner-operators. Driver Pulse is flexible and allows companies to have two different checklists based on their company’s current job needs.

Once a driver’s background check and drug test come back clean, JMS sends out an orientation packet online through the Driver Pulse app for the driver to review and sign electronically.

“We are able to enter them into our system and get them set up with a load almost immediately because they’ve gone through our orientation process already,” Hobbs-Thompson said.