January 2023
By Chris Mitchell, Adam Margolin
Back to Perspectives 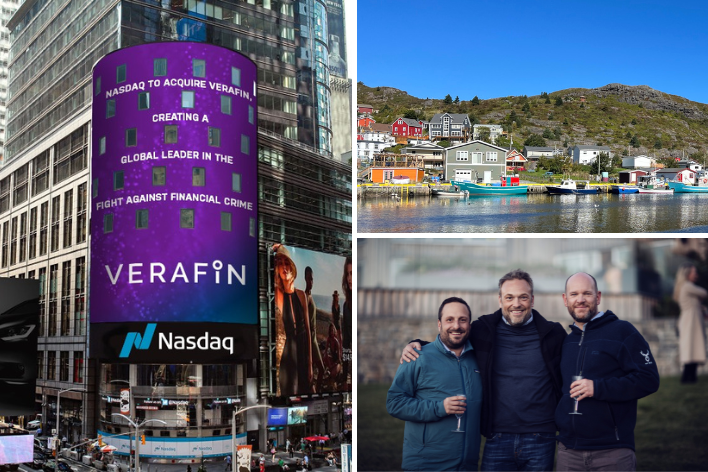 At our first meeting with Jamie King in 2011, it was clear that Verafin had a very big vision to disrupt financial crime technology. While Spectrum has a long history of investing in technology businesses that help financial institutions manage risk and regulatory compliance, Verafin’s approach to addressing the ‘whack-a-mole’ problem of combating money laundering and fraudulent transactions was different from anything we had seen previously. By combining the collective data insights of all of their customers in the cloud, rather than taking a more traditional siloed view, Verafin offered the promise of achieving what very few compliance companies could: adding true business value for customers. In an industry besieged by monotonous filings and formulaic reporting -- often long after a suspicious transaction had occurred -- we would frequently hear customers complain that compliance had lost its focus on what it was originally designed to prevent, and that it had become an increasingly giant cost center over time.

Verafin’s approach changed the game. Imagine a very large outgoing wire by a bank customer that looks highly anomalous relative to that customer’s typical banking behavior. Ordinarily that would be flagged as a suspicious transaction by a traditional software provider, and potentially be delayed by the bank, but in any event it would certainly need to be investigated by the bank’s internal compliance team. Verafin however, by virtue of its cloud-based approach, could look at the full picture of transaction activity involving that wire recipient across all of its customers, and determine with much higher confidence whether it was a valid transaction. This ability to reduce false positives and increase focus on true financial crime and money-laundering has been a breath of fresh air in the industry. All the while, Verafin has saved customers time and money by automating highly manual tasks by applying sophisticated machine learning analytics. And as more and more banks became customers (now numbering several thousand), more transactions were available for analysis, which augmented the value and accuracy of their analytics further.

We could go on and on about Verafin’s technical capabilities and how they ran circles around much larger, well-established competitors. Not to mention their highly mission-driven organization and culture. These competitive advantages, among others, allowed Verafin to grow revenue by 5x over the course of our seven-year partnership and firmly establish the company as the clear market leader in financial crime technology, culminating with the $2.75 billion acquisition of the business by exchange and markets technology leader Nasdaq.

Recently, we had the opportunity to reunite with the founding team in St. John’s, Newfoundland to toast to the company’s next chapter and reflect on our time working together. In our reflections, one of the things we found most remarkable about Verafin is that many of our biggest areas of concern at the time of our investment in 2014 ended up being key drivers of competitive advantage that were essential to Verafin’s ultimate success. We highlight a few of our initial questions and concerns here:

1. Would it be possible to create a world-class technology company in St. John’s, Newfoundland?

Being “on an island” is rarely a positive metaphor in tech investing, and here it was literally true. But having had prior success at Spectrum in investing in harder-to-reach geographies often overlooked by traditional investors -- think iPay in Kentucky, Bats Global Markets in Kansas, and Tenstreet in Oklahoma, to name a few -- we have long advocated that great, capital-efficient companies can be built anywhere, and frequently exist outside of the traditional Bay Area and Northeast tech hubs. However, the immense distance from Verafin’s headquarters to traditional talent hubs like Boston and Toronto gave us pause. Would the company’s location inhibit growth, particularly when it came to accessing the type of high-tech talent that software companies require to grow beyond modest scale?

Verafin’s St. John’s headquarters ended up being an unexpected asset. The company had a close relationship with Memorial University in St. John’s and quickly became an employer of choice for many of its high-performing engineering graduates, whom they could hire, train and, importantly, retain over long periods of time. Verafin was also able to home-grow a similarly capable sales and marketing organization, leveraging the best practices of great tech companies they studied from afar. Many companies aspire to close more deals remotely as a ‘nice to have’; given Verafin’s location it was, more or less, a ‘need to have’. And over time, their relentless focus on doing so created an organization that is as proficient at selling highly complex and sophisticated software remotely as any we have seen. Finally, with almost no employee churn (seriously), Verafin was able to devote the vast majority of company resources, mindshare, and energy towards solving the problems of financial crime, instead of replacing and (re-)training for open roles. Over the course of our investment, Verafin grew headcount to 700 full time employees (including 400 software engineers). We can think of no better testament to the value of the St. John’s workforce than the fact that not only did Nasdaq decide not to consolidate Verafin operations into one of its existing locations, but they are also investing in St. John’s as an innovation center for the future.

2. Would banks ever be comfortable sharing data in the cloud?

Financial institutions are inherently cautious by nature, and so it is not surprising that prior to Verafin the industry was incredibly reticent to allow sensitive financial information outside of their firewalls. Sharing this type of data (even in anonymized form) with peer institutions was a quantum leap, as previously it had been strictly limited to regulators and law enforcement when required to do so.

At the time of our investment, Jamie and the Verafin team had deep conviction that financial institutions would come to understand the power of community data intelligence. They knew first-hand from client relationships that investigation teams at banks shared Verafin’s mission to root out illegal transactions, and that they would inevitably want to leverage the power of collaboration to gain better visibility and deeper insight into financial crime hidden within legitimate banking activities. Verafin spent countless hours putting in the hard work of evangelizing the benefits of their approach: by engaging proactively with regulators; working with banks and credit unions to make them comfortable that the benefits of collaborating far outweighed the downsides and risks of being complacent; and in building a best-in-class platform that respected and addressed all privacy and security-related regulatory compliance obligations. Over the course of seven years, Verafin methodically built a secure, centralized platform for information sharing that is now serving investigators at over 2,000 institutions, and a platform that is the envy of the industry in helping to combat financial crime. Verafin’s willingness to think differently about the very nature of the financial crime problem, which felt so far ahead of the market 10 years ago, turned out to be absolutely essential in its ascent to category leadership.

3. How big could the market for financial crime technology be, and how much of the market could Verafin address?

From past experience with investments in ‘Know Your Customer’ data providers such as World-Check (since acquired by Thomson Reuters), we were well aware that financial crime was a pervasive, global problem. Fraudsters and money launderers employ ever-more sophisticated strategies, which then creates the ongoing need for technology to keep pace. We also had already witnessed 10+ years of remarkably consistent market growth even prior to our Verafin investment, as financial institutions scrambled to keep up with the onslaught of constantly changing regulatory requirements that accelerated precipitously after 9/11. Would these favorable conditions continue, or would the financial crime sector begin to experience diminishing returns as the industry began to suffer from regulatory fatigue?

Verafin’s success at the time of our investment had been achieved largely within the small- to mid-sized bank and credit union market. It was not entirely obvious that the company could translate this success with larger, global banks, many of whom had spent millions on incumbent technology systems and the vast operations teams necessary to support them. Prior to our investment we wrestled with core market size and market share questions about how deeply Verafin could penetrate the regional bank market, and whether they could ever be successful up-market with larger institutions with whom they had very little history.

Once again, the company proved our doubts here to be entirely unfounded at pretty much every step of the way. Through a combination of impressive product innovation and go-to-market execution, Verafin pursued its ‘bowling pin’ strategy of leveraging each successful deployment to convince a slightly larger financial institution that it could scale to address its needs. All the while regional banks that were not Verafin customers increasingly realized how much they could benefit from the collective insights of their earlier-adopting peers by joining the platform.

The market for financial crime technology continues to grow well, and with no end in sight. What started out as straight-forward transaction monitoring for suspicious transactions to meet money laundering regulatory compliance and prevent fraud in customer accounts, has now expanded to include use cases we hadn’t imagined. Detecting human-trafficking networks. Preventing elder abuse. Identifying sources financing terrorism, including the funding of rogue nation-states. And identifying crime ring activities with the sophistication to span dozens of financial institutions and hundreds of customer accounts.

Needless to say, we are deeply appreciative of the Verafin partnership, and we feel extremely fortunate to have had a front row seat as the team has realized its vision of emerging as one of the most important and successful companies in financial crime technology. We are certain that’s a role they will play for many years to come as a central part of Nasdaq’s Anti-Financial Crime operating business.