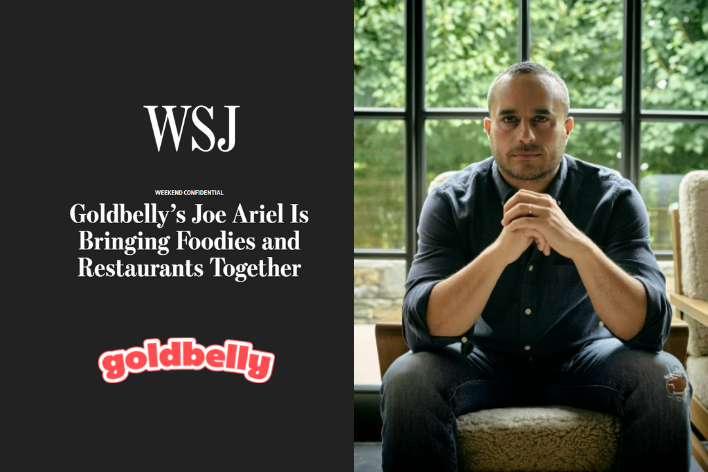 In 2012, when Joe Ariel was trying to get the restaurant delivery service Goldbelly off the ground, scores of potential investors told him his plan was misguided. A renowned venture capitalist for food-based startups declared that his business model was “stupid.”

Mr. Ariel believed in his gut, or perhaps his belly, that allowing people to order special dishes from acclaimed restaurants across the country—pork buns from Momofuku in New York, crab cakes from Faidley’s in Baltimore—would be a boon for both foodies and restaurateurs. “But when you get your butt handed to you 50 or 60 times by the geniuses of the capital world, you start questioning yourself, questioning everything,” he says.

Nearly a decade later, Goldbelly is a verb, as in “Let me Goldbelly you a muffuletta sandwich from Central Grocery” or “We Goldbellied Louie Mueller Barbecue’s brisket to celebrate.” The company had been earning a loyal in-the-know following for years, but the pandemic turbo-charged the appeal of enjoying delicacies from far-off haunts in the comfort of your home. Nearly half of the 900 restaurants selling food on Goldbelly’s platform have joined since March 2020. In May the company reported that it had more than quadrupled its sales over the past year, more than tripled its staff and raised $100 million in new funding.

“People are like, ‘You guys went viral,’” says Mr. Ariel, 45, on a Zoom call from the company’s headquarters in Manhattan, over an early lunch of smoked salmon from Russ & Daughters on an onion roll from Orwashers (both available on the site). “I’m like, that’s cool, but we’ve been building this brick by brick for almost a decade.”

Food was always a big deal for Mr. Ariel. His Yemenite-Israeli family prized large home-cooked meals, and he was entranced by the “theater of flavor and smell and people” at a young age. Growing up mostly in New York City, he sometimes bartered his father’s “locally famous” hummus and pita for his best friends’ veal parmigiana hero, beef lo mein or pork spare-ribs. “I loved it all,” he says.

Mr. Ariel studied economics at Vanderbilt University in Nashville, Tenn., where he discovered a taste for hot chicken, dry-rub barbecue, pulled pork and pecan pie. His “mind exploded” at the city’s Loveless Café, where he learned that country ham was basically like “little salty nuggets of love.” “It all obviously left a mark on me,” he says.

After a couple of years in the marketing department of the New York Knicks, Mr. Ariel realized he was “too impatient” to work his way up a corporate ladder. He was 25 when he decided to build a series of local restaurant guides called eats.com, which enjoyed some national success but demanded years of “hustling.” Late payments from clients often left him running up credit-card debt and behind on rent. He went five years without taking a vacation and avoided going out with friends for restaurant meals he couldn’t afford. “I remember thinking, one day I’ll be able to order appetizers, too,” he says.

His liquidity problems evaporated in 2009 when delivery.com bought eats.com and made Mr. Ariel CEO. It was a relief to have money, but he craved a new creative project. He also had a deep hankering for the flavors of his college days. Though he lived in New York City, one of the world’s culinary capitals, he began asking restaurants in Nashville to overnight some of his favorite dishes. Opening these boxes of biscuits and barbecue was unexpectedly emotional, he says. The food tasted good, of course, but he was startled by the way the sights, smells and grease-stained menus “instantly transported” him back in time. Nostalgia, he learned, “is the most delicious ingredient.”

Perhaps he was simply “a weird food guy,” but Mr. Ariel had a hunch that packages from beloved restaurants would have a similarly profound effect on others. He quit delivery.com in late 2010, wrestled with the new concept for a year and enlisted the part-time help of two software developers, Joel Gillman and Trevor Stow, and his then-girlfriend, Vanessa Torrivilla, a user-experience designer (they married in 2014 and have a young son). After countless rejections from potential funders, Mr. Ariel and his partners received an invitation from Y Combinator, the seed-money startup accelerator, which helped launch Goldbelly in 2013.

Restaurateurs understandably dodged Mr. Ariel’s calls at first, when Goldbelly was simply a dummy website with grand ambitions. But they continued to play hard to get even when the company had paying customers. Mr. Ariel recalls visiting a lobster shack in Maine and watching as the owner tried to hide from him behind a pillar. “People thought I was a delusional madman,” he says with a laugh. In 2015 the company’s founders went six months without pay to make payroll. But Mr. Ariel never lost faith that there would be “better days ahead.”

Although it took years of “begging” to convince many restaurants to partner on the site, Mr. Ariel says that Goldbelly received thousands of requests from prospective partners last year. Even before the pandemic, Goldbelly had won over chefs by making it clear that the site is a curated marketplace that celebrates craftsmanship and regionality. “We care just as much about the quality of their items as they do,” Mr. Ariel says. He adds that shoppers are willing to wait longer and pay a premium—a dozen bagels from New York’s Ess-a-Bagel costs $59—when they know they are getting the best. Danny Meyer, the restaurateur behind Shake Shack and Gramercy Tavern, became a lead investor in 2018.

Goldbelly works with restaurants on pricing, packaging and logistics, which means figuring out whether a meal should arrive chilled or frozen, assembled or in parts. It took a month’s worth of visits to Pittsburgh, for example, to find a way to avoid sogginess when delivering sandwiches from Primanti Bros., with their mix of meat, cheese, coleslaw and french fries between two gigantic slices of Italian bread.

When Goldbelly sent all of its employees home in March 2020, Mr. Ariel worried he might have to make cuts or forego compensation again to make ends meet. He didn’t predict that his most pressing problems would involve scaling up fast enough to meet demand. For at least four months early in the pandemic, his 45-person team was working around the clock “just to not break the site,” he says.

Despite the return of in-person dining, the number of eateries on the site continues to rise, albeit with less urgency. Mr. Ariel explains that Goldbelly offers an “asynchronous” revenue stream for restaurants, with orders they can fill during slower hours of the day—unlike takeout, which usually compounds a lunch or dinner rush. He adds that by broadening the customer base, Goldbelly has kept some restaurants in business and allowed smaller outfits to expand, such as Elle’s Belles Bakery in Bozeman, Mont., and Cape Whoopies in Cape Elizabeth, Me. “We are empowering foodies in the boonies,” he says.