We've all heard the saying "practice makes perfect" and likely experienced firsthand the crucial role that preparation plays in performance. Malcolm Gladwell popularized this notion and grounded it in science with the 10,000 hours rule. In Outliers, he notes that "the closer psychologists look at the careers of the gifted, the smaller the role innate talent seems to play and the bigger the role preparation seems to play." In other words, if you want to be great, you've got to put in the work.

It's one thing to understand Gladwell’s premise, and it's another to make it happen. People spend billions of dollars on various forms of training, but most experiences leave much to be desired. To start, practice isn't always fun and engaging, so burnout is real. Access can also be a major obstacle with cost and location putting limitations on the facilities and coaches individuals can train with. Lastly, few, if any, training solutions can tackle those next-level questions: how can I do more with less time and resources? How can I identify areas where I need to get better and those where I currently excel? While the internet drastically improved upon the status quo by enabling near-ubiquitous access to resources like videos and tutorials, it still falls short of solving these issues.

VR has long been a subject of speculation and fascination. Most media headlines on the topic paint the picture of "Ready Player One," vast digital worlds where users go to escape the real world. While these worlds may one day exist, VR is seeing real-time adoption as a less headline grabbing but very efficacious space in which users can improve upon skills used in the real world – a place to train, learn, and prepare. 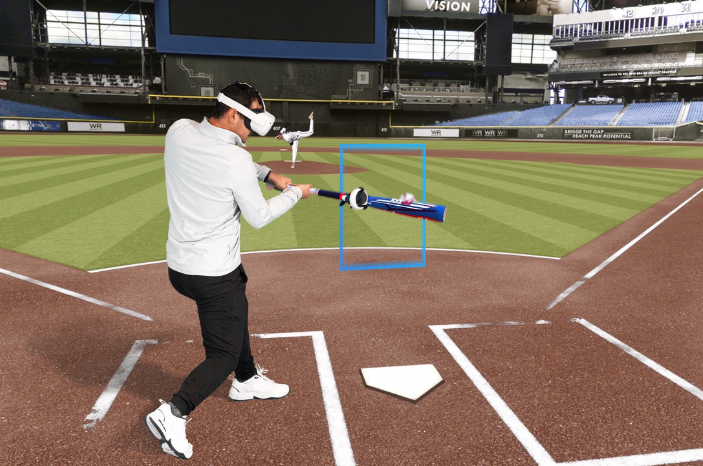 Chris O'Dowd, Founder and CEO of WIN Reality, understood the challenges of practice better than most. Chris spent his life around baseball and was a star player in high school and college, ultimately rising to the professional ranks. But cold winters training in New Hampshire were far from ideal and, in the off-season, it wasn’t easy to access good coaching. Batting cages were analog and expensive for what they delivered. Practices were hours away, and, even then, Chris couldn’t face real-world pitchers. In 2015, long before most Americans had heard the term “virtual reality,” Chris started exploring and immersing himself (literally) in VR. It was shortly thereafter that Chris realized this new platform could revolutionize training.

Chris ultimately founded WIN Reality, a VR sports training platform. The company’s first product utilized multiple cameras, projectors, and a headset tethered to a high-powered gaming computer. All-in, the hardware alone cost well over $100,000. As unwieldy and costly as it was, the benefit of virtual reality training quickly became evident. Some of the top players across the pro and collegiate ranks soon began using the product. As professional softball player Nadia Taylor said, “This is like a cheat code . . . everyone should be using WIN Reality.”

WIN gave athletes a means of creating infinitely repeatable game repetitions with a realism never possible before. Furthermore, VR allowed practice to take forms that couldn’t be replicated in the real world. Users could create customizable training scenarios mimicking game scenarios while facing real pitching, all with the benefit of high-fidelity measurement and insight. Today, the product is used by more than half of MLB teams and over 100 NCAA baseball and softball teams, representing thousands of pro and college athletes. WIN Reality enables coaches and players to identify and alleviate hitter weaknesses and, in doing so, statistically improve batting average, on-base percentage, and plate discipline metrics.

Youth sports is an increasingly competitive and lucrative industry. In the United States alone, $19 billion is spent annually on youth sports. Parents fuel this spending because of their willingness to invest in their children's success. More than 60% of parents believe their child will likely receive a college sports scholarship, and more than 30% think they will play professionally or go to the Olympics, according to the Harris Poll. Baseball and softball are two of the largest sports in the United States, with nearly 16 million participants, and millions more globally. In short, youth sports are no longer the quaint, local activities but have become big business opportunities.

With a product validated by professionals, Chris and the WIN team spotted the opportunity to tackle the consumer youth sports market in October 2020 as the Meta Quest 2 launched. For the first time, the price of a quality VR headset met consumers’ expectations for a relatively common household item. As a result, sales of Meta Quest headsets expanded rapidly. While Meta does not publish sales data, it is believed that well over 10 million Meta Quest 2 headsets have been shipped to date.

Now, for the monthly price of just under $30, any baseball and softball player can train the way professionals are able to. Within the last year, WIN consumer users have faced nearly 40 million pitches in their Meta Quest headsets, choosing from a library of over 7,000 real-life pitchers.

WIN Reality offers a fundamentally different, higher quality, and more accessible training experience than current alternatives. In WIN, players and coaches can train in ways not available to them in the real world. Are you facing a lefty with a nasty slider in tomorrow's game? Dial up that situation and get "real" reps against a similar pitcher ahead of your matchup. Measure your progress against those types of pitchers over time. Do the work, but at a fraction of the total cost and make it gamified and fun.

We are thrilled to be working with Chris and the entire team at WIN Reality. The team at WIN exhibits many characteristics that we look for in our CEOs and executive teams: deep domain expertise, forward-thinking product vision, and desire to meet and exceed the demands of their customers. WIN’s business also has several hallmarks of Spectrum Equity portfolio companies including a base of passionate users, category leadership, and capital efficiency. Partnering with WIN Reality also represents a continuation of multiple long-standing themes in our portfolio, ported to a new platform. We plan to leverage our prior experience partnering with consumer subscription (Headspace, AllTrails, Scribd, Ancestry) and digital education businesses (Lynda.com, DataCamp) to push sports training to new heights.

Congratulations to Chris and team – we are looking forward to working together to democratize access to world-class sports training.

If you are interested in learning more about WIN Reality or our partnership, please read the press release.