Doug Hirsch never intended to get into the health-care business. The Yahoo and Facebook veteran was thinking through ideas back in 2010 when he became fixated on the fact that a consumer couldn’t look up a medication on the internet and find out the price.

Around that time, he became friends with Trevor Bezdek, a fellow software entrepreneur. Hirsch’s and Bezdek’s moms had known each other for years in Los Angeles and had a gut feeling that their entrepreneurial sons would get along. Bezdek agreed that drug pricing was opaque, which represented a big opportunity for them to solve. They decided to start GoodRx the following year and now run it as co-CEOs. The company ranks No. 20 on the 2020 CNBC Disruptor 50 list, announced Tuesday.

GoodRx offers discount cards and coupons for consumers to take to the pharmacy, often allowing them to get a lower price. It was an early mover into the space but now has half a dozen competitors, including Singlecare and RxSaver, which are each jostling for a corner of the highly lucrative market.

Many companies in the burgeoning health-technology space cater to the so-called worried well, meaning those with spending money who are anxious about their health. But GoodRx markets its service to the 28 million Americans who are uninsured, as well as to people with high deductible plans who might still get a deal on their generic medications via its website and mobile app. Since its founding the company says it has helped Americans save more than $20 billion on prescription drug expenses.

How the company makes money

GoodRX makes part of its revenue by collecting fees from the pharmacy benefits managers, or PBMs, it works with when consumers present their GoodRx coupon at the pharmacy.

PBMs are middlemen that fit into the notoriously complicated drug supply chain, where they negotiate prices with manufacturers on behalf of insurers.

In a very simple example, imagine a patient pays $20 for a drug. The PBM might collect $6 from the pharmacy, leaving the pharmacy with $14 (the pharmacy also incurs dispensing costs). The PBM then splits some of that fee with GoodRx.

Independent pharmacies will sometimes make money on the transaction, but not always. For that reason, some of them have started their own rival discount programs or work with a different contractor that is offering to reduce the fees. But GoodRx’s Hirsch claims that overall, the service is “financially positive” for pharmacies.

“A lot of times you can end up losing money (as an independent pharmacy) when a customer uses a discount card,” said Steve Moore, a pharmacist with Condo Pharmacy in New York. “But it depends on the drug.”

GoodRx also sells advertising on its website and charges consumers $5.99 per month for a subscription service called GoodRx Gold, which can offer savings for customers with many prescriptions. 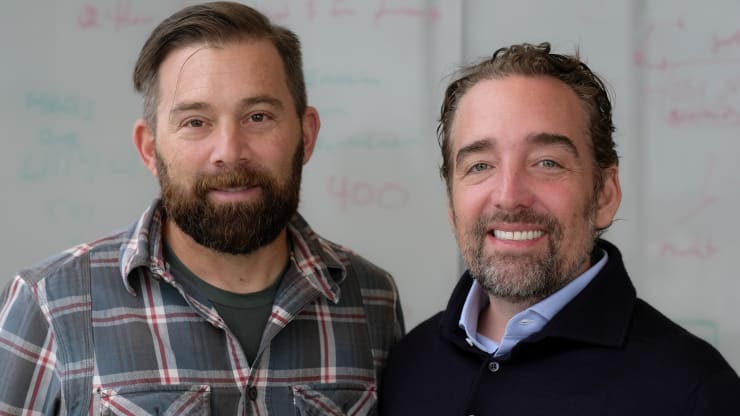 The company’s business model seems to be working. GoodRx has been profitable on and off since 2013, and was pulling in more than a hundred million in profit in 2018, said a source familiar with the company’s financials. The company’s last valuation, after an investment from private equity firm Silver Lake in 2018, was $2.85 billion. The company has accelerated growth in many areas, and revenue has grown over 50% every year since inception, according to Hirsch. About 17 million Americans use GoodRx every month to find the best prices at more than 70,000 pharmacies nationwide.

The company could be poised for major growth during the Covid-19 pandemic because it caters to those who don’t have insurance and are looking for options to get care at home. Unemployment may already have hit 25%, and those numbers could increase if there’s a second wave of Covid-19 in the fall. That could also leave millions without coverage.

But the company faces some complicated politics and mechanics in the industry it serves. Pharmacies could sour on GoodRx. And technology giants, like Amazon, may also encroach on their space as they move into the pharmacy space. There’s also the looming, albeit more distant threat, of single payer.

GoodRx’s Hirsch and Bezdek told CNBC that they’re “constantly worrying” about the other shoe dropping, but they are keeping at it. “All we can do, and all we have done, is stayed true to our mission of helping provide more transparency to consumers,” said Bezdek. “And it’s led us well so far.”

The company hasn’t ruled out an IPO but wouldn’t comment on the specifics. “Like any private equity-backed company, we are looking for liquidity options,” Hirsch shared in a statement. “We can only say we’re considering options that a company in our situation would.”

If the company does go public, it now has some seasoned leadership in its ranks. This month it brought on a new CFO, Karsten Voermann, from wealth management firm Mercer Advisors, and a new president of health care, Bansi Nagji, who previously was the chief strategy officer at McKesson.

GoodRx is tapping into a very real — and growing — consumer need. The country spends more than $500 billion on prescription drugs each year, and that number is only set to increase despite regulatory scrutiny. Americans pay on average more than $1,200 for their medications per year, which is far higher than in any other developed nation.

But when Hirsch first shared his idea, many experts told him to avoid the space completely, as incumbents in the drug supply chain often take aggressive steps against newcomers. For example, after Amazon made its first steps into the space by acquiring online pharmacy PillPack, CVS sued to stop an executive from jumping ship, and e-prescribing giant Surecripts called in the FBI to look into how PillPack was getting prescription information. 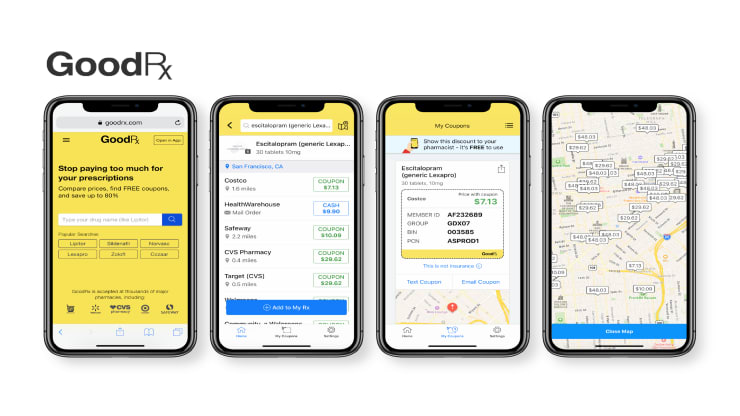 GoodRx offers discount cards and coupons for consumers to take to the pharmacy, often to access a lower price.

But Hirsch ignored their advice, recalling that it irked him that he could never find any pricing information when he searched for commonly prescribed drugs, like Lipitor (Bezdek jokes that Hirsch is “cheap”). So the early team built a first version of the product by scraping prices from websites or calling pharmacies to ask for medication costs.

Hirsch and his cofounders realized they were onto something when they started getting inundated with phone calls from doctors. It was a big frustration within the medical community that doctors couldn’t answer the most basic questions from their patients about how much a drug would cost and whether there was a cheaper option available. Now, in many cases, they could check GoodRx.

Nowadays, GoodRx offers a competitive price by looking across the various retailers, including Walmart, Costco and CVS. That price is often cheaper for the consumer than the cash price they’d be offered at the register, which is typically highly inflated.

In theory, pharmacies will work with GoodRx because consumers will simply shop elsewhere if they’re quoted a price that’s too high. Hirsch said that a pharmacy executive once told him that the threshold where a consumer would pay out of pocket for a generic tended to hover around $25. As he explained, pharmacies are limited in how much they can bring a price down, because of their contractual obligations to insurers and other entities.

PBMs also seem willing to work with GoodRx. The company struck its first deal with MedImpact in 2012. Through that relationship, GoodRx was able to tap into MedImpact’s employees to figure out how drugs really got priced. Within six months a slew of other deals followed, and now it’s working with many of the largest companies in the sector.

"If America as a country decided to keep all Americans healthy, and things were upfront and transparent, there would be no need for GoodRx."

Hirsch freely admits that GoodRx exists in large part because the U.S. supply chain is so broken. He notes that he’d be happy to move on if the system made it easier for Americans to get drugs they could afford.

“If America as a country decided to keep all Americans healthy and things were upfront and transparent, there would be no need for GoodRx,” he said. Hirsch thinks it will take time before the pharmacy sector is transformed. “I don’t suspect that’ll happen, but if it did, I’d happily hang up my hat and move on to another problem.”

Some drug-pricing experts say it’s a tricky philosophical problem. Eric Pachman, founder of research firm 3 Axis Advisors, notes that he appreciates GoodRx’s business as a consumer because of the cost savings. “But when I put on my drug-pricing researcher hat,” he notes, “I can see how it might be extending the time that we have a fix in the marketplace, because it reduces patient sensitivity to cost.”

In other words, if consumers had to pay the sky-high usual, customary and reasonable price — also known as UCR, the amount paid for a medical service in a geographic area based on what providers in the area usually charge for the same or similar medical service — without the use of insurance, they’d be outraged and the system would be forced to change. Hirsch acknowledges the concern but notes that GoodRx still shows the UCR prices and that many consumers are still eating the cost out of pocket. And yet the system hasn’t changed.