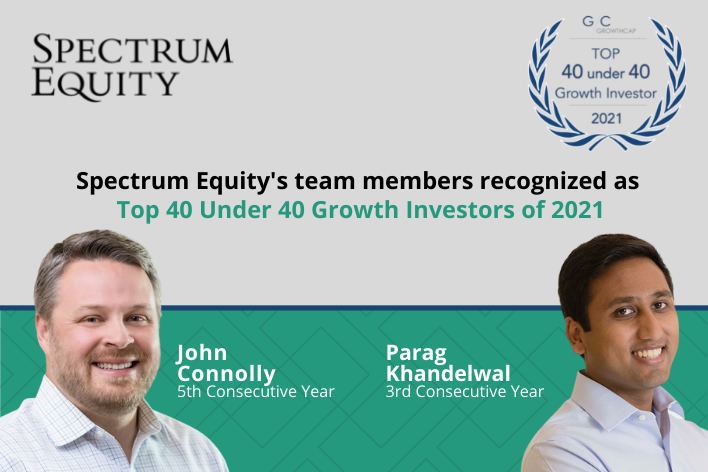 GrowthCap selected awardees based on the depth of their deal experience, demonstrated ability to help the companies they invest in, collaborative work style, and progression towards firm and industry leadership roles, among other attributes.

In its eighth year running this awards process, GrowthCap reported a dramatic increase in capital and talent dedicated to the growth investing asset class since the first cohort of awardees were selected in 2014. According to the publication, 2021 was the most competitive year since the inception of the awards, with hundreds of nominations submitted in support of some of today’s best growth investors.

In evaluating candidates, GrowthCap took into consideration substantive feedback on nominees from their colleagues, peers, portfolio company CEOs and others who have witnessed their investment skill and performance.

The publication stated that "nominees were truly impressive; each demonstrating notable business intellect and judgment, consistent work ethic, high emotional intelligence and a determination to push through the most challenging situations. Needless to say, it was extremely challenging to make selections given the large pool of high caliber candidates. Ultimately, awardees were selected based on that."

John joined Spectrum Equity in 2009 as an Associate. Now a Managing Director, John has has completed a wide range of growth investments ranging from minority investments to full buyouts. He has been most active in the education technology, consumer internet, online marketplace, and SMB software sectors.

“At Spectrum Equity, we are singularly focused on partnering with founders and entrepreneurs who are looking for growth capital expertise to accelerate growth and scale their internet-enabled software and information services companies. Over the past 12 years, I’ve had the privilege of working with world-class entrepreneurs who lead companies that are defining the categories in which they operate. I look forward to continuing to play a strategic role in helping entrepreneurs achieve their goals.” – John Connolly

Parag joined Spectrum Equity in 2012 as an Associate. Now a Principal, Parag is most active in the enterprise software, financial technology, education & certification and sales enablement sectors. He has been involved in Spectrum’s investments in BATS Global Markets (acquired by CBOE), RainKing (acquired by DiscoverOrg/ZoomInfo) and Verafin (acquired by Nasdaq). He currently serves on the boards of Bitly, Digital Marketing Institute, Offensive Security, Origami Risk, Our Family Wizard and Quantile.

“Spectrum Equity’s focus on internet-enabled software and information services companies has enabled us to invest in an incredibly dynamic category, providing innovation across all parts of the economy. I’ve been fortunate to partner with exceptional management teams and work together to build category-defining companies, creating innovative products and producing real efficiencies for their customers at scale.” – Parag Khandelwal